Violent clashes are reported in the village of Menecir, located between Til Temir and Serêkaniyê of which it belongs. Turkish war planes are bombing the village still full of civilians.

The invasion attacks and civilian massacres carried out by the Turkish state in Northern and Eastern Syria were protested in front of EU institutions in Luxembourg.

The SDF Press Center has announced the last 24-hour balance sheet of the Honor Resistance against the Turkish occupation attacks. According to the statement 78 Turkish soldiers and mercenaries have been killed. The statement also said that 20 SDF fighters and 15 civilians have fallen martyrs.

TEV-DEM Executive Board member Aldar Xelîl said: “We will not allow Erdoğan to come, we will not allow him to come until a single one of us remains. If Erdoğan comes, the danger of ISIS will increase.”

The SDF fighters on the Girê Spî front dealt a heavy blow to the Turkish invaders. Clashes were experienced around the city. A vehicle belonging to the Turkish army was destroyed and numerous mercenaries were killed.

Clashes are going on between the Turkish state and mercenaries attacking the village of El Cad in Manbij and Manbij Military Council fighters.

Our correspondents in the region reported that warplanes belonging to the invading Turkish army have once again bombed Serêkaniyê.

Swiss SP and Workers Party issued a statement saying: “Erdogan wants to revive ISIS” and called on international forces to take action against the Turkish occupation.

The European Union condemns the Turkish state’s occupation in Northern Syria, and prepares sanctions for illegal drilling off the coast of Cyprus.

The occupation attacks and massacres carried out by the Turkish state in Northern and Eastern Syria were protested by actions in Brussels and Toulouse.

PYD co-spokesperson said: “With the regime we have a military agreement. It is the first step. Filling it with content will happen through dialogue and negotiations.” Muslim also said that they received assurance about the closure of the airspace to Turkish war planes.

US President Donald Trump said he is preparing “the heaviest sanctions” against Turkey.

Fighter Mordem Dirbêsiyê in Serêkaniyê resistance: The Turkish state wants to invade Serêkaniyê. They want to make history repeat itself, and to bring in savage gangs under its command to commit a massacre against the people. There has been a violent battle and resistance here for six days. The only path that lies before us is resistance and victory, there is no other way. They bombed and killed people in Serêkaniyê. The occupation forces are suffering heavy blows. They are forced to flee every time they attempt to advance. This is the situation in Serêkaniyê.

Turkish military offensive against northern Syria was protested in a series of demonstrations held across Russia, Ukraine and France.

HAT fighter Goran Dêrik who is taking part in the Serêkaniyê resistance: We have been fighting in Serêkaniyê for six days. The Turks carry out constant attacks with fighter jets and artilleries. We will continue to fight against them to the end. I was deeply affected by the massacre against my people. We promise our people that we will avenge the martyrs. We will turn this place into hell for them. They claim to have captured Serêkaniyê but on the contrary, they are fleeing. We make this clear, we will fight to the very end. Resistance is life, surrender is betrayal.

Reports that Turkish state forces seek to evacuate the 31 rural neighborhoods in Suruç and Birecik districts of Urfa, at the border with Kobanê. People living in the area said that they have faced pressures to leave their homes since the day Turkish military offensive against northern Syria began.

Heavy clashes are taking place between SDF and ISIS mercenaries in the Ain Issa camp where thousands of ISIS family members are staying. According to reports from the ground, the Turkish state is arming the ISIS members in the camp.

Fierce clashes between SDF fighters and the Turkish army with jihadists in Abu Sırre town in Ain Issa. .

8 Kurdish civilians, including children, were wounded during the Turkish state bombing of Serêkaniyê city centre.

The SDF fighters hit the Turkish state and their mercenaries between Til Temir and Eyn Isa. The invaders came by Eyn Isa and Girê Spî in an attempt to enter Til Temir.

The SDF fighters launched their attack near the village of Alya, Til Temir. Two tanks were destroyed, several invaders killed or injured.

Thousands of people bid the last farewell to the Eqîde Eli Osman, who was martyred in the Turkish army’s attack on the civilian convoy heading to Serekaniye on Sunday.

What shocked her most, she said was watching the video in which Turkey-linked mercenaries (Free Syrian Army), executed two Kurdish fighters withe their hands are tied by the roadside.

HDP co-chair Pervin Buldan held a press conference at the IHD Istanbul branch to talk about the Turkish government’s attempt to occupy Rojava.

Buldan said: “We women will never accept war and occupation”.

The invasion carried out by the Turkish state against Rojava was protested in Moscow, Tokyo and Limassol, Cyprus.

Officials from the Lêgerîn Hospital in Til Temir announced that 75 civilians have lost their lives and 450 others wounded by the attacks against the Serêkaniyê city and its villages ongoing for six days.

The historic resistance against Turkish invasion continues in Serêkaniyê on day 6.

Syrian troops have reached Til Temir district of Heseke Canton after the Autonomous Administration of North and East Syria announced an agreement with the Syrian government to counter Turkish incursion.

Sterk Tv reporter Mihemmed Efrîn, who was wounded in yesterday’s Turkish attack against a civilian convoy in Serekaniye, has lost his life. 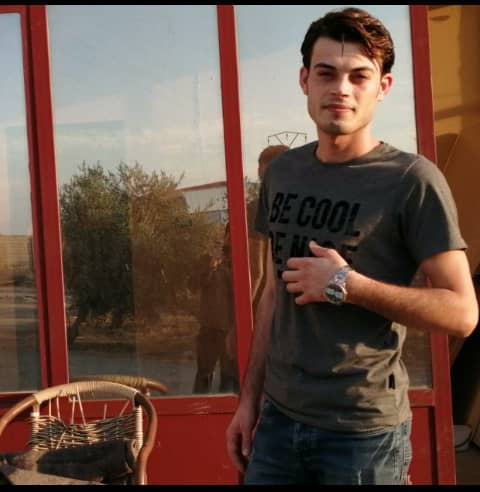 Today’s attacks by the Turkish army and allied jihadists against Serekaniye city center left a civilian dead and two others wounded.

Kurdish youth movement Komalên Ciwan called upon the youth to turn everywhere into an area of resistance in response to the Turkish genocidal attacks against northern Syria.

Civilian Izedîn Mehmûd El Yûsif, who was heavily wounded by Turkish attacks against the Dirbêsiyê district and its villages yesterday evening, has lost his life this morning while receiving treatment at hospital.

The fighters resisting in the city of Serêkaniye against the invasion attacks of the Turkish state, said that this war is about “Kurdish existence” and called on Kurds to stand up and join the resistance.

Jean-Christophe Lagarde, President of the French political party Democrats and Independents Union (UDI), asked for the cancellation of the Euro 2020 match between France and the Turkish national team, after the latter made a military salute to support the Turkish occupation when it played with Albania.

Following the Security Council meeting held in France on Sunday night, the Turkish occupation was condemned with harsh words, and it was announced that measures would be taken for the safety of civilians and French soldiers in the field.

PKK Executive Committee: National unity and joint struggle are the keys for Kurds not to lose what they have achieved and to get new achievements. If every Kurdish gain is to be preserved, this will be possible with the level, power and national unity of the struggle carried out in all parts. In this respect, there is an urgent need for a National Conference to be held involving all Kurdish political forces, parties, organized democratic society, intellectuals and artists.

Heavy clashes are going on in Serêkaniyê since last night. SDF fighters are carrying out a great resistance and have foiled attempts by the Turkish forces and its mercenaries to enter the city.

The invading forces attempted to enter the city from the east and north, but all their attempts were foiled. There are many dead and wounded. Aircraft and howitzer attacks have continued uninterruptedly since last night. Yesterday, 2 tanks was destroyed in the clashes. 27 invading forces soldiersare reported killed.