Kurdish Red Crescent (Heyva Sor), Syrian Red Crescent and International Red Cross have finally managed to enter the city of Serekaniye on Saturday to deliver medical supplies and retrieve the seriously wounded individuals from the hospital.

While the teams got 4 slain civilians and 30 of those wounded out of Serekaniye, there are still slain and wounded individuals trapped in the city. Some of the injured have been taken under treatment in the Qamishlo Hospital.

The Education Commission of North and East Syria stated that attacks by the invading Turkish state and its violent militias have affected all health and education places in the North and East of Syria. The Commission said; ” 810 schools have closed their services because of the attacks of the invading Turkish army. That is why the education process has been stopped. More than 86,000 students have been left without education and 5,224 teachers have left their jobs.”

Education process stopped in northern Syria
The Turkish military offensive against northern Syria is heavily affecting the civilian population in the region. Turkish attacks killed 235 civilians, including 22 children, and injured 677 others…

Large number of people have joined a demonstration in the German city of Frankfurt against Turkish incursion into northern Syria on Saturday. 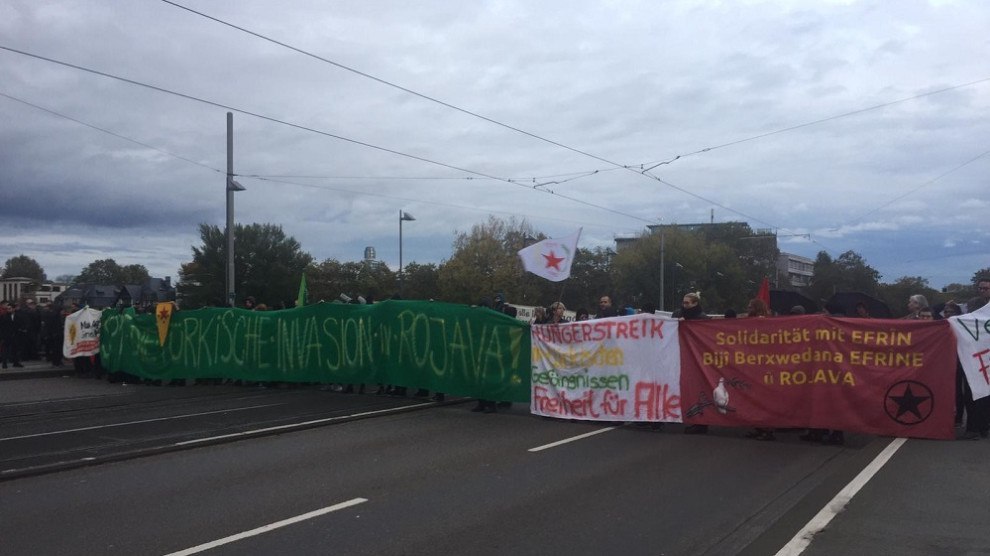 Masses gathered in the German city of Stuttgart on Saturday to join a march to the Hauptbahnhof (Central Station) against the Turkish military incursion into northern Syria. German police have laid a siege in the area and are not allowing the crowd to stage the protest march. 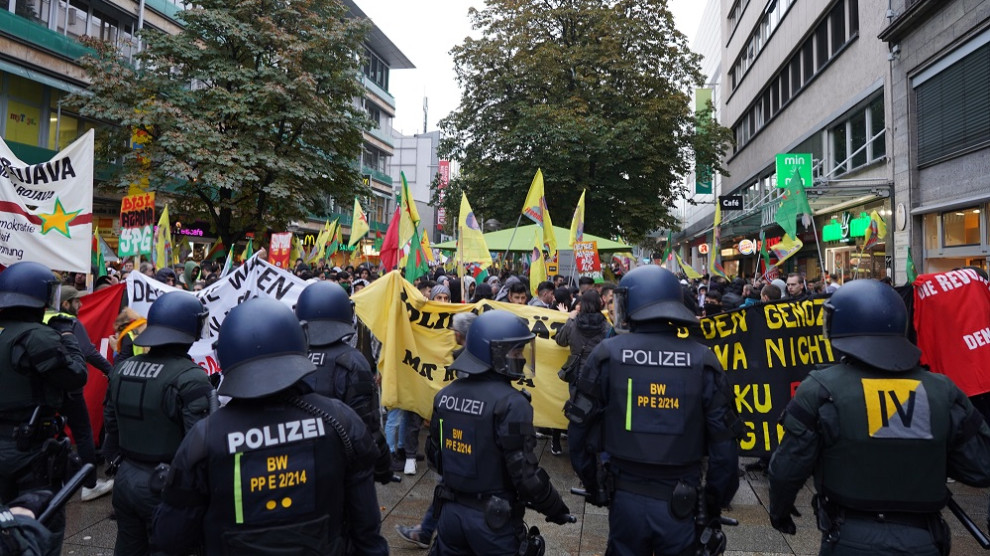 Thousands of people joined a massive rally in German capital city Berlin on Saturday in protest at the Turkish incursion into northern Syria and gave the strong message “Rojava is not alone”.

Massive rally in Berlin: Rojava is not alone
Thousands of people have joined a massive rally in German capital city Berlin on Saturday in protest at the Turkish incursion into northern Syria. The gathered at the Potsdamer Platz to join the pr…

After days of failed attempts, the Kurdish Red Crescent (Heyva Sor) and International Red Cross have finally managed to enter the city of Serekaniye on Saturday to deliver medical supplies and retrieve the seriously wounded individuals from the hospital.

Syriac Union Party said they as Syriac and Assyrian people see the Turkish military presence in northern Syria as a threat, and called upon the international community to stand against the Turkish state’s attacks seeking to invade the region.

The Democratic Autonomous Administration of Cizire Region called upon the international community to put pressure on Turkey to end its genocidal campaign against the civilians and adhere to ceasefire.

“Turkish attacks killed 235 civilians, including 22 children, and injured 677 others. At least 300,000 people were displaced by the aggression. There are dead bodies still trapped under the rubble and dozens of civilians are waiting to be treated in Serêkaniyê.”

One of the SDF fighters on Abu Sira front, Şervan Zana, stated that the occupation forces have not halted their attacks or activities but are preparing for a large scale attack against the region. He said the ceasefire was just symbolic.

SDF fighter in Gire Spi: The ceasefire is just symbolic
The military offensive launched by Turkey together with its jihadist mercenary allies on October 9 to invade North and East Syria continues on day 11. Fighters of the Syrian Democratic Forces (S…

The European Democratic Kurdish Society Congress (KCDK-E) called for mobilisation in solidarity with Rojava which is under the attack of the Turkish state seeking to invade the region.

Pakistan Democratic Women’s Front: Let’s stop the Turkish invasion. We will be standing by revolutionary women under all conditions.

Heyva Sor a Kurd official for North and East Syria, Cemîla Hemê said that a corridor must be opened to evacuate the injured and civilians whose lives are at risk due to the ongoing attacks of the Turkish state.

Turkish army is attacking the hospital of Serêkaniyê.

Turkish forces are heavily shelling the village of Shewarxa in Afrin’s Shera district. Initial reports suggest that a Syrian soldier has been wounded in the attack.

Turkish fighter jets are shelling the Serêkaniyê city in coordination with scout planes.

Kongreya Star Coordination called for urgent action for the evacuation of civilians and the injured in Serêkaniyê.

Karayılan: Rojava Revolution is a national achievement that every Kurd must defend!

People’s Defense Central Headquarters Command Murat Karayılan: “We should mobilise to have the international community rise up and to create awareness against Turkish invasion. Rojava Revolution is a national achievement and national honor and it is the duty of every Kurd to defend it.”

Representatives of Assyrian, Syriac and Yarsani communities spoke at the KNK’s 19th Congress in the Netherlands, calling for Kurdish unity against “barbaric Turkish state”.

The Democratic Autonomous Administration of Cizire Region called upon people to gather in Til Temir and head to Serêkaniyê to evacuate civilians and the injured.

The SDF General Command has said in a written statement: “The Syrian Democratic Forces (SDF) have agreed to a US-brokered ceasefire with the Turkish state on 17 October.

The SDF is observing the ceasefire which began at 10 pm on 17 October. However, the Turkish state still has not stopped its attacks and violates the ceasefire. Although 30 hours have passed since the ceasefire, Serêkaniyê remains under siege and mercenaries do not allow civilians to reach the wounded.

Reconnaissance planes are flying over Serêkaniyê. Mercenaries are blocking the road to the hospital thus preventing the opening of a humanitarian corridor. The situation of the injured is getting worse.

Speaking about the war crimes committed by the Turkish state in Rojava, ÖHD co-chair Av. Ayse Acinikli, said: “We need to document civilian massacres and the use of chemical weapons, in order to apply to international law institutions.”

Representatives of Kurdish parties from Rojava stressed that the Kurdish people were under threat and attack and said: “We can only respond to these attacks with national unity.”

The left-wing newspaper The Morning Star in the UK wrote an article titled “Turkey’s Erdogan branded a terrorist, war criminal and ally to jihadists”.

The Syrian Democratic Council (MSD) said the Turkish state had violated the ceasefire agreement and called for international observers to be sent to the region.

Protests against the invading Turkish state and its mercenaries occupation attacks on Northern and Eastern Syria continue in Europe.

HDP deputy Dilan Dirayet Taşdemir stressed that the attacks on Northern and Eastern Syria are related to the AKP’s imperial dreams. Taşdemir noted that the mentality based on an anti-Kurdish policy is destined to lose.

Riseup4Rojava will organize many actions in the coming days to express solidarity with Rojava, called for participation in the campaign they launched.

KCK: The war crimes committed by the Turkish state during the occupation operation cannot be ignored. Turkish warplanes used the banned weapons they used in the Media Defense Areas in the invasion of North-East Syria. In this respect, the peoples of the world and human rights institutions should bring to account the dirty war chief Erdoğan and the other responsible people for the murder of civilians and the use of banned weapons.

KCK: The peoples of North-East Syria, world peoples and the democratic public should not loosen their resistance positions and continue their struggle until the invaders leave North-East Syria altogether. The ceasefire it would be meaningful if it was taken as a process that would lead to the withdrawal of the invaders and would be lead to taking steps in this direction.

KCK: After the talks between the US and Turkish state delegations, the incomprehensible demand for the withdrawal of SDF forces would in fact mean the legitimation of the occupation. In this respect, the agreement brokered by the US delegation, except for the ceasefire, has neither political nor moral legitimacy.

KCK: The [SDF] fighters and the peoples of the world and the democratic public supporting this resistance aimed at ending these invasion attacks and withdrawing the invaders altogether. In this respect, it is not possible to accept an option other than the withdrawal of the invaders.

KCK: With the approval of Trump, it is understood that the North-East Syrian administration has accepted this ceasefire in order to demonstrate the injustice of the invasion of fascist Erdoğan. Since there was an invasion attack and serious crimes against humanity, this ceasefire should not result in legitimizing the occupation, but rather in the withdrawal of the occupation forces.

KCK: The Trump administration has tried to stop the war brokering a ceasefire to get out of this situation. Giventhe resistance of the SDF and the support it received, Trump would have experienced as much exposure and isolation as Erdoğan. Both the US and Turkey needed a ceasefire, to survive the difficulties they experienced because of the resistance and its support by the peoples of the world and the democratic public.

KCK: The resistance with great moral support and legitimacy has frustrated US President Trump and fascist and anti-Kurdish Erdogan conspiracy against the peoples of North-East Syria. The resistance, the pressure of the peoples and the democratic public, has put US President Trump in a difficult situation in which no political leader has ever fallen into history, allowing the invasion of the genocidal fascist Erdogan.

Withdrawal of the invaders is the only option!

The invading Turkish state have dispatched mercenaries and heavy weapons to Serêkaniyê since yesterday evening. There were clashes last night.