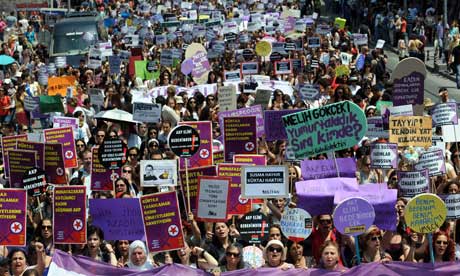 Thousands of women march in Istanbul to protest against the possible introduction of severe limitations on abortion. Photograph: Bulent Kilic/AFP/Getty Images

Thousands of women joined a pro-choice rally in Istanbul on Sunday amid growing fears that Turkey’s Islamist government intends, in effect, to ban abortion.
Terminations are legal in Turkey until the 10th week of gestation but the ruling Justice and Development party (AKP) is reportedly working on a bill to ban them after four weeks, except in emergencies.
The bill has not been published, but fears that it could substantially curtail a woman’s right to choose have been stoked by comments from senior government officials. Speaking last month at a conference on population and development, the prime minister, Recep Tayyip Erdogan, said: “There is no difference between killing a baby in its mother’s stomach and killing a baby after birth.” He said abortion and elective caesareans were “secret plots” to slow Turkey’s growth.
The health minister, Recep Akdag, said that the government would present its abortion bill by the end of June, adding that women pregnant as a result of rape should let the government take care of the baby.

The mayor of Greater Ankara, Melih Gökçek, said on TV that a mother who considered abortion should “kill her herself instead and not let the child bear the brunt of her mistake”.

The remarks have pushed abortion to the top of the political agenda – and spread a chill among activists. Tugba Özay Baki, of the Istanbul Feminist Collective, said: “If abortion is banned in Turkey, women will still have them, but under unhealthy and dangerous conditions. Shady characters will start to make money off their desperation.”

At the demonstration on Sunday, marchers carried banners reading “We are women, not reproduction machines”, “AKP – take your hands off my body” and “We don’t discuss our right to abortion.”

“We are here to protest against the government’s attempts to use women’s bodies for their political goals”, Behal Yazgan of the Turkish Women’s Party Initiative told the Guardian. “The prime minister tries to force his views and his morals on the whole population but we will not let him.”

The demonstration was met with spontaneous applause by some bystanders. One man said: “Abortions were never a subject of political discussions in Turkey until [the AKP] came, and it should under no circumstances be illegal.”

Dr Mustafa Ziya Günenc, a gynaecologist in the German hospital in Istanbul, said the government’s proposal to cut the legal limit for abortions to four weeks would in practice be a ban: “Abortions simply cannot be performed at that stage, both for technical and health reasons.”

“Before abortion became legal in 1983, 250 out of 10,000 pregnancies ended with the mother’s deaths, and 225 of these deaths occurred because the women they tried to abort using wire, chemical substances or bird feathers,” said Günenc. “Abortion was legalised for that exact reason.”

Activists fear that these concerns might not deter Erdogan, a devout Muslim who has campaigned for population growth, urging Turkish couples to have at least three children. More than 25% of Turkey’s 75 million population is under 14 and many activists argue that the country urgently needs to improve sex education.

“Sex education simply doesn’t exist in schools, universities or even in the media here,” Günenc said. “What children learn about sexuality and sexual health mostly depends on what they are told in their families, by doctors or, on what they see on the internet.” He added that unwanted pregnancies and STDs were one consequence. “And to my knowledge, there are no government efforts to improve this situation.”

Specialists say they have not been consulted about the abortion bill. The Turkish Gynaecologist and Obstetrics Association, the country’s largest umbrella organisation, has not been invited to participate in a commission preparing a report on the planned legislation, according to Professor Ismail Mete Itil, the association’s president.

“No woman wants to have an abortion,” said Günenc. “But every woman needs to have that choice, no matter what the circumstances are.”