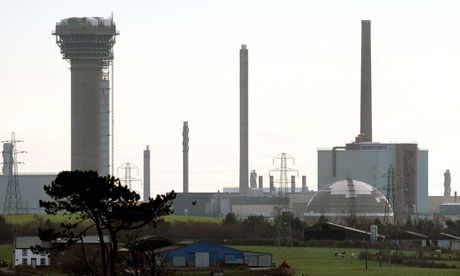 The Sellafield nuclear site near where five men were arrested under the Terrorism Act. Photograph: Owen Humphreys/PA
Counter-terrorism officers have begun questioning five men from east London alleged to have been filming near the Sellafield nuclear site in Cumbria.
Meanwhile, police in London staged the first of a series of raids on addresses linked to those detained. The Metropolitan police said four houses in east London had been searched.
The five were arrested under section 41 of the Terrorism Act 2000, which says a “constable may arrest without a warrant a person whom he reasonably suspects to be a terrorist”.
The investigation is at an early stage. Some past arrests by UK counter-terrorism officials have led to people being released without charge.
The arrests have attracted considerable interest because they came hours after the announcement of the death of Osama bin Laden. The police say they are not “at this stage” connecting the arrests to the killing of the al-Qaida leader by US special forces, however.
The men were detained at 4.32pm on Monday after a vehicle was stopped and checked by officers from the Civil Nuclear Constabulary (CNC), which polices the facility in west Cumbria.