Ewen MacAskill in Washington and agencies 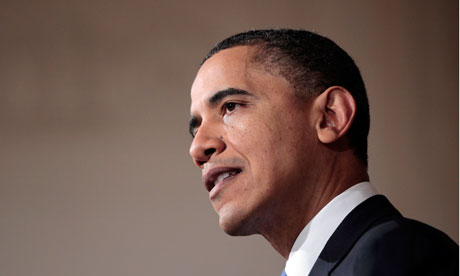 Barack Obama has warned the Libyan leader Muammar Gaddafi that he faces the prospect of international sanctions over violence against demonstrators, and condemned Gaddafi’s actions as outrageous and unacceptable.
Obama is sending secretary of state Hillary Clinton to Europe to discuss what actions can be taken to stop the violence, and to take part in a meeting of the Human Rights Council in Geneva.
The US president took care to maintain balance in his pronouncements over the uprisings in Egypt. By contrast, this statement was unequivocal in its criticism of Gaddafi’s actions. Obama promised that the Libyan leader would be held accountable.
“The suffering and bloodshed is outrageous and it is unacceptable. So are threats and orders to shoot peaceful protesters and further punish the people of Libya. These actions violate international norms and every standard of common decency. This violence must stop,” Obama said.
He broke his silence on Libya as US citizens in the country are preparing to be evacuated.
Signalling he is considering sanctions, Obama said he has asked his administration for a list of options on how to respond to the crisis. “This includes those actions we may take and those we will coordinate with our allies and partners, or those that we will carry out through multilateral institutions,” he said.
Gaddafi has had sanctions imposed on him before when he was regarded as a pariah by the US, Britain and others before voluntarily surrendering his weapons of mass destruction. At this stage, the threat of sanctions is mainly symbolic and would not have any immediate impact, though in the long term they could damage the Libyan economy.
Obama, at the start of his statement, stressed his priority was to protect US citizens in Libya. But turning to the Libyans, he extended condolences to the families who have seen members injured or killed.
Aligning the US with the protesters, Obama said: “The United States also strongly supports the universal rights of the Libyan people. That includes the rights of peaceful assembly, free speech, and the ability of the Libyan people to determine their own destiny. These are human rights. They are not negotiable. They must be respected in every country. And they cannot be denied through violence or suppression.”
He added: “Like all governments, the Libyan government has a responsibility to refrain from violence, to allow humanitarian assistance to reach those in need, and to respect the rights of its people. It must be held accountable for its failure to meet those responsibilities, and face the cost of continued violations of human rights.”
Meanwhile in Libya, Gaddafi’s control seems to be eroding as major cities and towns closer to the capital fall to the rebellion against his rule. In the east, now all but broken away, the opposition has vowed to “liberate” Tripoli, where the Libyan leader is holed up with a force of militiamen and tanks.
His supporters, a mix of Libyans and foreign African fighters bused in, roam the capital’s main streets, called up by the leader’s speech on Tuesday night in which he vowed to fight to the death.
Gaddafi’s residence at Tripoli’s Aziziya Gates is guarded by loyalists along with a line of armed militiamen in vehicles, some masked, an activist reported. The radio station building downtown is also heavily fortified.
In one western neighborhood, security forces have stormed several homes and arrested three or four people, witnesses said, while tanks are deployed on the eastern outskirts.
With a steady rain, Tripoli’s streets are largely empty. But in many neighborhoods, residents have set up watch groups to keep out militiamen, barricading streets with concrete blocks, metal and rocks, and searching those trying to enter.
“Mercenaries are everywhere with weapons,” said a resident who spent the night awake in her home hearing gunfire outside. “You can’t open a window or door. Snipers hunt people. We are under siege, at the mercy of a man who is not a Muslim.”